This article was written after the passing of Henry “k’asA” Washburn for the Euchee Sun newsletter. He was a great friend, relative, and person that I owe a lot to. 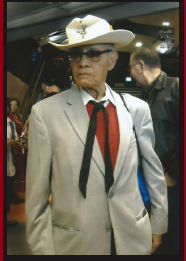 What can I say about Henry Washburn. He was mean. He was the first to point out if I had gained weight, quick to show my Euchee was wrong, and questioned my driving ability anytime I drove him somewhere. k’asA though was something different. k’asA always had food prepared in the evening and was willing to share anything he had with me. He gave me a roof over my head when I had no where else to go. He taught me how to garden and embodied the characteristics of the old time Indian: tough, kind, and deeply rooted in his beliefs. Henry Washburn made my life miserable. k’asA taught me who I am and what it means to be Euchee.

k’asA in Euchee means to miss someone, like when you miss the trash collector because you forgot the collector comes on a Tuesday. But I will miss him in another way. I will miss all the support he gave me. I will miss the few times I saw him laugh and smile. I will miss getting a jar of his hot peppers that he canned himself. I will miss him speaking Euchee because he said something to me different every time. I guess it’s fitting that when I first came out to Oklahoma I stayed with him, and before I left I lived with him. He called his home, “Poor Henry’s Home.” He is in a Kingdom now, I think he earned it.

He pulled a gun on me, taught me how to sing a traditional song, and unwillingly accepted to not smoke in my car when I asked him not to. We never had an easy relationship but it was definitely meaningful and memorable. We are related to one another, somewhere down the line, but he didn’t let me into his life because we were kin. He let me into his home because he was a giving person, an open person. There are not very many of those people in the world, and now there is one less.

They say he was the last male speaker. I say he was the last of his generation. Others will take his place but none will embody the passion and grit he had for life and for others. What do I remember most about k’asA and the time I spent with him? That at 80 something years old, I needed him more than he needed me. I wish he was still here cursing me out and telling me what I am doing wrong. I guess I will just have to wait until I see him again.